The wonderful world of Cobb! 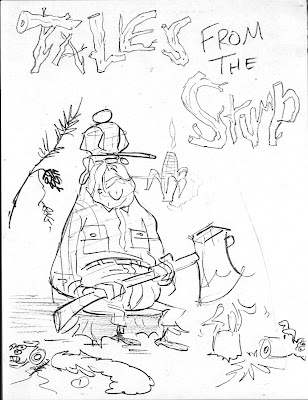 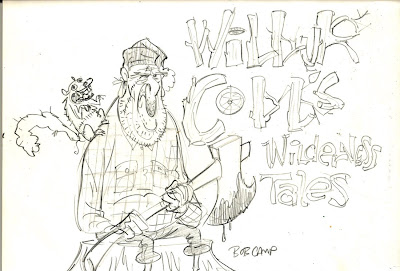 You know, one of my favorite characters on Ren and Stimpy was Wilbur Cobb. He was voiced by the legendary Jack Carter. His name was based on the head writer at Nick, Will McRob. Nick didn't like Cobb but we squeezed him whenever we could and he always stole the show. Jim Gomez, Bill Wray and I were in love with Cobb. Even after the show was done Jim and I were dreaming up new adventures for the crusty old coot!
This was an anthology concept with Cobb as host. We wanted to build a full size puppet like this that would host and set up different stupid horror an suspence shorts about life in the wilds!
I will be digging through my old sketches and posting more Wilbur!
Posted by Bob Camp at 5:14 AM

I would have loved to have seen that. That would have been hilarious. I love it.

I want to watch that show.

oh my god, i would kill to see a wilbur cobb show.

definitely my favorite character on ren and stimpy. it doesn't get much funnier than that scene when ren and stimpy show him their cartoon. absolutely genius.

i wish there was a wilbur cobb shirt.

love this guy soooo much. Please post anything else u have on him!

Hahaha, Wilbur Cobb! I can't wait to see more of this. We need some hilarious horror cartoons in the world!

So what was the deal with Raymond Spum?

A puppet? The falling body parts would look excellent!

Bob, couldja please reveal whom the crazy old movie executive was that Cobb's Stimpy's Cartoon Show rant was based? It's probably ok since whoever it was must be dead now, right?

These sketches are great! I'd love to see this cartoon.

Nothing funnier than an old man's ear sliding off his face.

I always loved Wilbur Cobb! He never got enough credit.

I must admit I didn't care too much for Cobb after his intial appearance in STIMPY'S CARTOON SHOW but I love these drawings.

Thanks Vince, yeah it's one of many that never got past the idea stage.

Yeah, Perry, Stimpy's Cartoon show was really great. the storyboards of cobb during his rant by Chris Reccardi are the funniest ever!

OK Anon, who are you?
Raymond Spum is a character John and I came up with as a fictional Walt Disney type creator of Spumco. In the early stages of Stimpy's Cartoon Show Spum was the Movie exec that Stimpy was to show the cartoon too. After Spumco was fired from Nick we decided to create another character to replace him as the SPUMco reference didn't work for Games animation any more. Thus Cobb was born. Spum was never more than an idea really.

Hi Chip, I don't know who the crazy old movie exec was. It was just this recording that we got from somewhere of a raving ol' movie coot. We borrowed from his diatribe liberally!

Hey Shawn, yeah I love the ear. When the animation studio put that scene together they put the ear in upside down but somehow it doesn't matter.

Hey Steven, Yeah Wilbur was a labor of love.

Hey Rick, well you can't please everybody all the time:)

"Shhh! The walls have teeth!"
Wilbur Cobb was definitely my fave post-Spumco character. He reminded me so much of my grandfather, especially the long, protracted coughing fits. A pretty underrated Games episode is Prehistoric Stimpy, not necessarily the most fluid visually but probably my favourite Cobb episode in terms of the crazy dialogue.
BTW Thanks for the back story for Raymond Spum, I never quite knew what that was about.

I love characters like this...you know they have a bajillion interesting stories to tell.

Some of Cobb's later appearances could've been seen as a spinoff setup; his primary function was narrating twisted tales of familiar settings.

My favorite among them was Prehistoric Stimpy.

that corncob pipe made me wet my panties. Absolutely love that guy!

These are simply amazing (particularly the latter picture with the bloody axe). Love to see a show with Wilbur Cobb.

I always suspected that Raymond Spum was partially a tribute to Raymond Scott. I suppose that would've been John's doing, since he's obsessed with the guy.