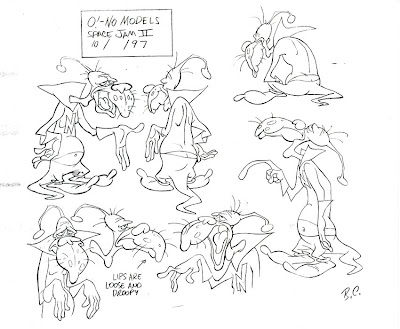 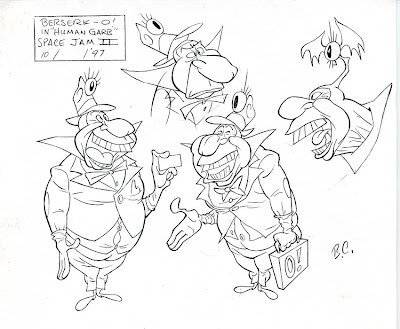 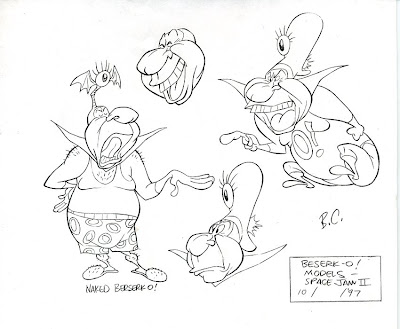 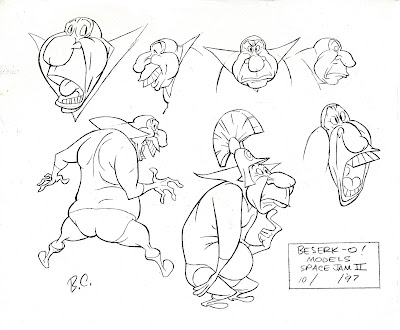 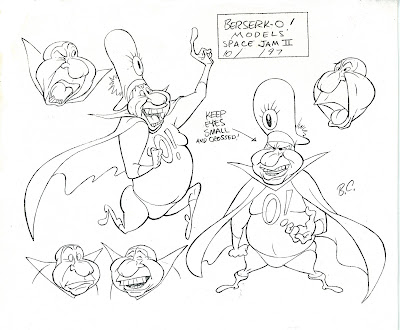 About 11 years ago I worked on the ill-fated attempt to do a sequel to Space Jam. it seems that Michael Jordon wasn't the least interested in the project. Anyway the bad guy in the movie was supposed to be Mel Brooks. For this design I did tons of drawings of stills of Mel I printed out from his films. I then redrew each expression over and over, each time pushing the exaggeration until I had worked out a formula for his design. Here are the results. The other character is one of his minions.
Posted by Bob Camp at 9:21 AM

those are some fucking DRAWINGS right there

cool cartoons you made!

so help me if they make ANOTHER SPACE JAM great drawings as usual.

Bob, those are great. I love the way that you show both fat and muscle at the same time, even with a few lines for detail.

And they didn't make this movie why???? Oh yeah, it probably woulda sucked like the first one. No disrespect to the drawings Bob. Those are great! The art is never really the problem.

Let me add my voice to the chorus and say those drawings are great!

I guess it never occurred to Warners that it might be possible to make a Looney Tunes movie without Michael Jordan?

I love these. What does Mel Brooks think of them?

From looking at these I can only conclude that Space Jam 2 would have blown the first one to smithereens! Those Mel Brooks expressions are hilarious.

Hey Brian,
Thanks for noticing the anatomy.
I try to make the characters seem real but always keep them as cartoony as possible. Keep in mind these are for a featurs so they can be more complex.

Hey Kevin,
Yeah, the art on almost every movie I've ever worked on was great. Usually the early designs are the best too.

Thanks JJ,
The whole thing was very political. the producer said he had Michael on board, the studio was luke warm on it any way and when he finally said no they let it die. Lots of movies never get made. I've worked on 3 or four that never made it to production.

Hi Looney,
Mel never saw them and I think they had only contacted his management about te project and he never became involved. Nobody ever saw these drawings outside of Warners.

Hi David,
Thanks a lot!

hope to reach your skill level one day, Bob Camp!

You have a really funny way of drawing hands.

These drawin's are great. I am sure the movie would never have been nearly as funny though.

Great drawing, Bob. Tons of energy in these.

I hated the first Space Jam with a passion ( I walked out with everyone in the lobby looking at me scared... I was LIVID!! ), but I'd have been willing to sit through another if the designs had been THAT appealing!

Hell, even if MJ had been willing to degrade himself yet again you probably wouldn't have gotten hired, right? I mean after all, there's not much room for creativity of that calibre anymore.

Shame. Great drawings, though! Kinda Don Bluth-ish, but I like it!

Wow, that's extremely interesting. I never heard of this. Those designs are excellent. They should hire real cartoonists like you to make these movies. They're the Looney Tunes, for the love of God! They should be wild and cartoony.

LT characters are so great I even find Space Jam and LT Back In Action watchable because there are still some hints of their personality. But the animated parts are only watchable and the life action stuff is pretty crappy in both of them. Now these characters look a zillion times more interesting than that Swackhammer guy or Lola Bunny.

Hey Bob, your still as talented as ever. Your mind just keeps on going. Give me a call the next time your mind goes to stand by mode and let me know whats going on. I love you Bro. Steve Camp. P.S. What ever happened to that Bee Ville Idea?