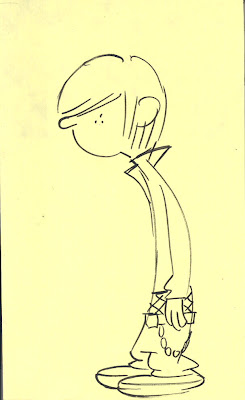 That's a good compliment. thanks.

I can't really see the CHarles Schulz resemblance. It looks more like Mort Walker to me.

Great design though. Very simple, but very good. Reminds me of tons of kids I knew in high school.

Thanks Niki, Ryan and Joedude.

Hey Weirdo, yeah there's some Beetle Bailey in there too. I was going for a clean solid newspaper style. I'm going to come up with a little brother for this guy soon too.

I really like this character design. I know you have done great comic book work...have you considered making your own comic strip?

It's Jackson! I recognized him instantly! This is a great drawing, which doesn't look anything like a Schultz character (they were all plump and cute; this guy is elongated and real), and i agree with zane asylum: you should try to produce your own comic strip. Staring this 16-year-old, his cute/annoying kid brother, and a bunch of dogs...

Hi Zane, thanks. I am thinking of a comic strip but it's a lot of hard work and difficult to sell a strip.

Hey Melody,
You hit it right on the head. it is Jackson and I'm thinking of a strip just like you said.
Much love sis!

Hi Cuz , I remember moving paper and stands around Six Flags for you back in the days