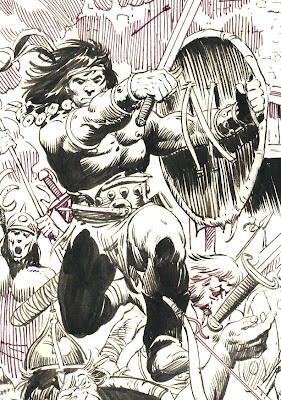 Here is a small detail of a splash page I just posted on my Comic Book Blog.
Go and check it out!
Posted by Bob Camp at 3:00 PM

a small detail?? Ok, I'm looking at the whole thing now in another window, it's awesome. How big do you draw anyway, Bob? Whenever I see drawings like this I think to myself that it must actually be really big. And then I see the original and it's not. Whats going on, is it more than just a steady hand? Did the guy drew this using a magnifying glass and a brush made of flea pubes??

Awesome BC. Today almost everyone wants to be a Jim Lee imitator.

I'm sure Bob has the specifics in front of him. The Alex Raymond pages I've seen were huge. But I think most Marvel pages are 1 and a half times up from print size.
Great drawing and inking Bob.

Kinda reminds me of Brune Hogarth.

Man it's like you channelled Frazetta, Buscema, Hogarth and Kubert on their best days. Great job!

Hi Rick, thanks!
I don't even know who Jim Lee is.
Oh well..

Yeah Vincent is right.
thanks dude!

Zane you are being too nice!

You deserve a medal for this

He isn't a terrible artist but he makes every single character he draws the look the same. Apparently in Jim Lee's world, everyone as some degree Asian blood.

Rick-
I was a huge fan of Lee's Batman, mainly because he found a way to make the short ears cool. But I agree, you've seen one Lee character, you've pretty much seen them all, with few notable exceptions (I do like his Joker, too).