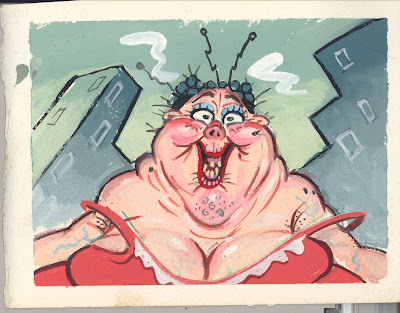 Holy crap this was always my favorite close-up painting from R&S! Love the veins and armpit hair!

So ugly it's beautiful. Nice!

Haha you did some of the best work for Ren and Stimpy.

Oh geez, so you're the monster responsible for this. This. THIS was the painting that I always singled out as an example of why Ren & Stimpy was the most vile and perverted show on children's television. It is also the painting I use to point out the "beautiful ugliness" in the show. It also gave me nightmares. You really are one hell of an artist.

Best full close up of a character ever. The veins, the hair, it's just fucking awesome.

Also I agree with Thad, you were definetly a powerhouse on this show. Unfortunately, the "Spin-co" propaganda machine has largely white washed you out of Ren and Stimpy. You, Jim Smith, and Bob Jaques had alot to do with this show taking off.

You, sir, are awesome.

hahaah holy shit that is awesome!!

What a wonderful, hideous work! One of my most favorite moments in R&S show.

HAHAHAHAHAHA you rule, Bob! One of the gross paintings that's stuck with me over the years.

I can still hear the howling coyote sound effect. Brilliant!

Ahh, that brings back memories...of the show, not the woman...

This is fantastic Bob, I've always been a fan.

Had anyone else used this effect before you guys? The extremely detailed close-up...?

"Had anyone else used this effect before you guys? The extremely detailed close-up...?"

It was inspired by Bob Clampett. John K was the first to implement it that much though.

Haha this is awesome!

"It was inspired by Bob Clampett."
Thanks Anonymous

I just notice she has a pig nose.

Hey thanks for the really nice comments, everybody!

I loved this. Such a great drawing. Do you know who did the final painting that was used in the cartoon?

Hi, Im remember this cahracter from a ren and stimpy episode, Its Exellent!!!

"Unfortunately, the "Spin-co" propaganda machine has largely white washed you out of Ren and Stimpy."

If I'm not mistaken, John actually singled Bob out as one of the R&S artists who was clearly superior to himself, alongside Jim and Vince - "The Illustrators", he called them; "Allowed the whole show to go further", something to the effect of that. Alls I'm sayin' is it didn't take me long to recognize how important Bob's work was and is.