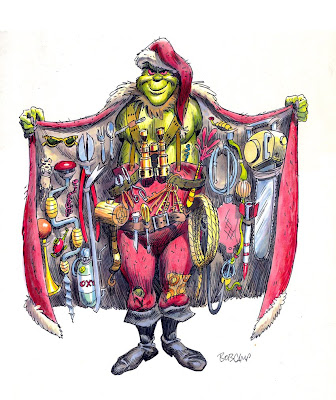 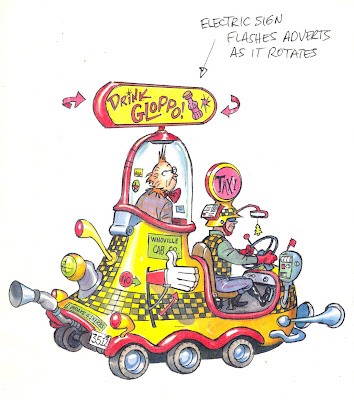 Here are a couple of color concept sketches I did for the Grinch movie. I always wanted to build this taxi cab and drive it around in NYC
to see if I could get some fares.
Posted by Bob Camp at 2:40 PM

i'd be down to help you build that cab! ha!

Is that a douche-bag?

Thanks smo. Yeah let's do it!

Yeah, but in NYC you'd need a taxi medallion to be a legal cab in the city. This allows a set number of cabs to be on the streets making up traffic, I can't think of the exact number now though.

Did you ever meet Jim Carry?

those are both great

Hey Brandon, it was just a fantasy.

Yeah I did meet Jim. He was really funny. I was pitching a storyboard to everybody and I suddenly realized somebody was breathing down my neck and I looked back and Jim was standing right next to me leering down (he's quite tall) at me with a creepy grin. I nervously looked around and everybody was grinning at me and somebody said "I think the big guy likes you Bob". It's something to see that face a half inch away when you are used to seeing it on the big screen. He was very nice and told me he was a fan of my work.

Oh I think you'd pick up a hell of a lot of fares.

Fun drawings! The items the Grinch keeps in his Santa coat are quite disturbing, but I do think you could make some nice cash with that awesome taxi.

I love that first drawing. I love the Jack Davis vibe.

By the way, is the Grinch packing heat?

That's mad! I must say that animation is an area that interests me, but I know little of the history/developments over the years. Ah, one day to work with artists and make marvelously inventive films :)

awesome awesome awesome! what'd you color/ink these with? just being nosey. other than being really obviously well executed, they're both really FUNNY drawings. the mouse in the coat and i brake for snerbs haha

Man those are really great. I dig them a bunch!

Hey I remember these!! I loved these when I saw them back then!
especially the cab. we gotta get somebody to build one of those and get a medallion.