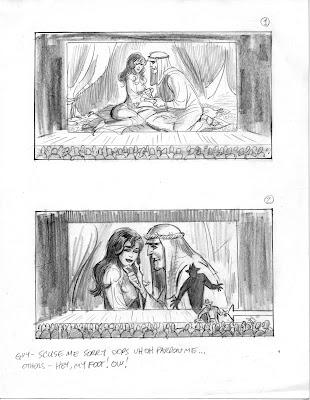 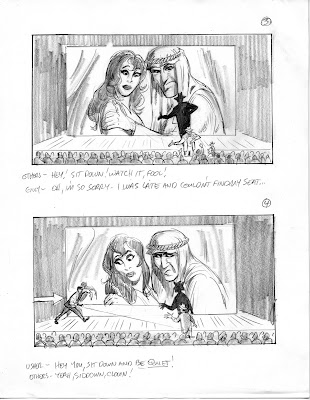 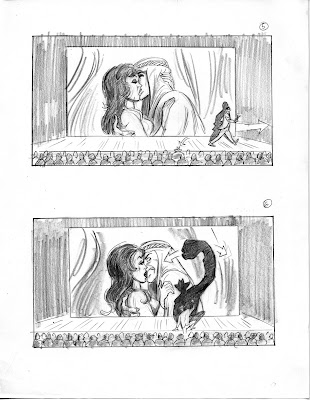 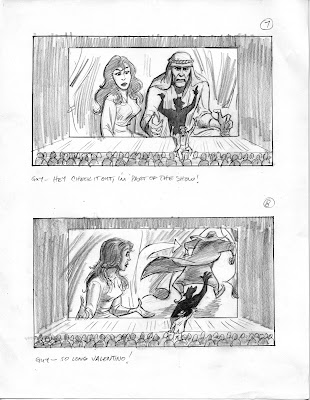 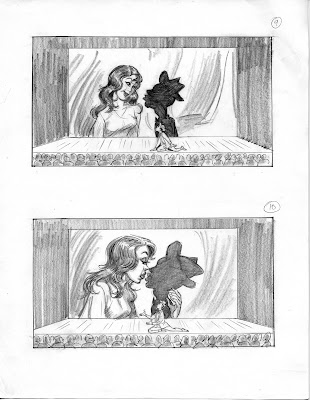 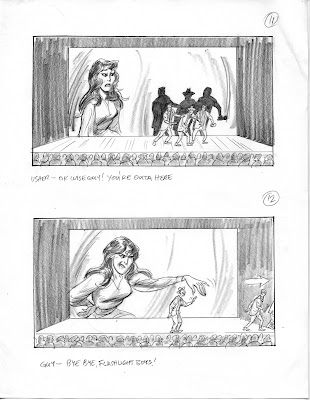 A few years back I did these boards for my friend Jerry Rees for the Cine'Magique show he directed for Euro Disney.  The idea is that park guests sit in a large theater and watch a documentary about filmmaking through the years.
While they are watching the show a loud jerk enters the theater and so disrupts the show that Valentino and the girl on screen react to the hubbub on stage as the ushers try to throw the jerk out.  Eventually the jerk enters the screen and becomes part of the show.
Jerry also directed the Alien Encounter ride for Disney world Florida.
Posted by Bob Camp at 7:59 AM

That would have been cool to watch.
Very nice drawings.

The show you were working on became CinéMagique at DLP. There are clips on YouTube. Looks like it's mostly just a movie with a bit of live actor in it.

The other show was Alien Encounter at WDW. The show has now been changed to included Stich.

Thanks and thanks for the info Brian. Have you done the Alien encounter ride. It's great!

Hello Alina,
Thank you very much!

Hey Bob I was wondering, What's your favorite cartoon of all time?

I did ride Alien Encounter at WDW years ago and loved it. Really amazing alien and how it 'crashes' out of the containment tube.

Hey Anon,
It's hard to say.. Probably Deputy Droopy by Tex Avery.
I still laugh outloud at it.

Hey Brian,
Yeah it's all about what you can't see. Most of the effects are delivered b y the chair you are sitting in. Like the asshole sitting behind you kicking your chair saying "Eat him". I thought it was a real guy. And the blood splattering you when the guy on the catwalk gets eaten. I heard the version in Japan had to be toned down.

He was quite apologetic for a jerk. Maybe he was late because he was saving orphans from tigers? Seem like a very judgemental audience. Plus he got the girl in the end. But then again women go for jerks. What a jerk!

I'm newbie here, I hope to get friends at this forum