The idea was to create a 3D animated version of Jim Carrey as a fish.  I started out doing lots of caricatures based on screen grabs.  These were from Dumb and Dumber.  Then I did lots of sketches of Jim as a fish 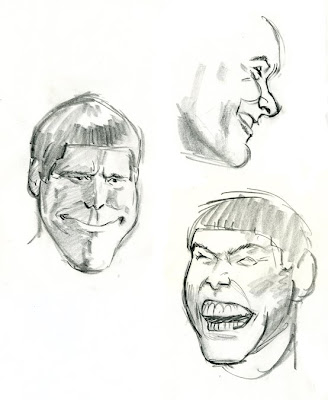 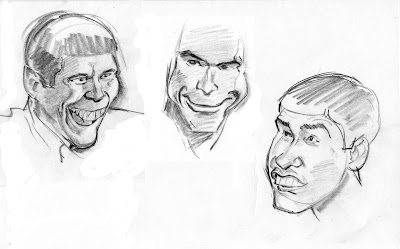 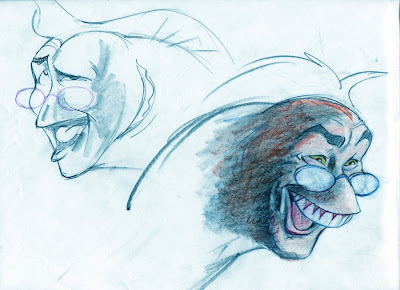 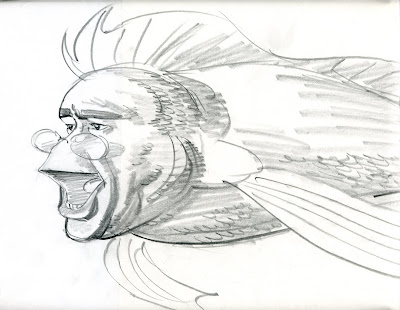 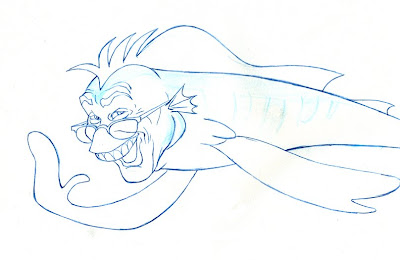 This film was to be a remake of the 60s live action/animated picture starring Don Knotts.
Lots of tests were done with Jim wearing a motion capture rig with several hundred mocap dots on his face to capture the expressiveness of his rubbery face.
This last piece was for presentation based on the above sketches.
Sadly, the film was never made. 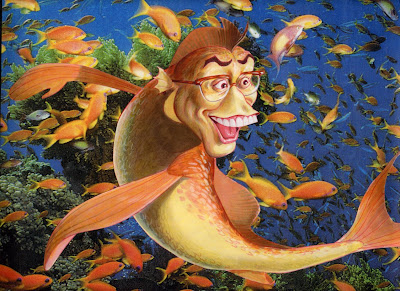 Whoever that is it looks great.

these are some really nice drawings. stop making the rest of us look so shitty.

Are you sure it was 'sadly' that the film was never made? Heh. Great drawings tho!

Jim Carrey as Mr. Limpet, huh? Interesting. Like how the fish turned out.

This is a really fascinating look into move making, thanks a ton for posting this stuff. Your sketches of Jim crack me up, he's pretty much a cartoon already.

Your drawings are great, as usual, but the remake sounded like a bad idea. (I'm glad you had a paying job, though.)

Don Knotts has a weak chin and full lips, so he already looks like a fish. Jim Carrey has a prominent chin, and it looks odd grafted on to a fish body. Plus motion capture probably would have diminished Carrey's performance, since at that time the technology needed to be tweaked a lot just in order to look presentable.

If I recall correctly, you were at WB when my friend Teddy N. was there. I think you both were doing the inspirational art for future animated Warner features.

Ryan, did it ever occur to you that I'm not posting MY shitty stuff? Believe me here's lots of it.

Hi Kevin,
Yeah they went through development twice on this thing that I know of and when I started here was evidence that it been developed once before.
Thanks for the compliment tho!

Hey Brother,
Yeah interesting. This isn't how the fish turned out. They never figured out how to do the fish really.

Boy, JJ, you really nailed it on the head.
Yeah I was there with Teddy. He was sitting off all by himself in the "Never never land" that was development. I would go over all the time and look over his shoulder and marvel a his stuff which was way over the heads of he people in charge. Thank Dog he's over at Pixar now where they know genius when they see it.

"Sadly, the film was never made."

I'll have to disgaree but these are certaintly wonderful drawings. BTW, did you like the original Mr. Limpet Bob ? I thought it was pretty good.

Hi PC,
Yeah I liked it. the animation was great!

I haven't seen the original. I agree with JJ Hunseeker about the motion capture would not have been a good choice, even if the technology didn't need cleaning up and took everything in as is. Jim Carrey's funny facial contortions are partly amazing because we don't usually associate these extremities with humans [just cartoon characters]. Seeing them on a non human, they wouldn't look stretched or extreme enough. If they hand animated they could easily make some stuff even Jim Carrey isn't capable of.

Also if they had done it it would have looked cool with a more painterly rendering like in your presentation piece. But likely they would have tried to have it more 'realistic', i.e. with reflective scales and basically a fish with a human head. Which is scary for any child who contemplates the actions of the combo who birthed this son of Satan.

Hey Bob, Dave Bemis here. I worked with you on this project. I was the lowly PA everyone bossed around...hehe. Thanks for making the short lived days on Limpet a lot of fun. Still have tons of your drawings you gave me and the Ren and Stimpy one is a favorite of my friends. Dont you have cub scout meetings to go to??

Those drawings look wonderful, i heard about that Mr Limpet movie remake.

I've seen the original one, it's wonderful.

It's a pitty this one never got made, because Jim makes a fantastic fish.

Haha what a funny pictures, the fish looks good and entertaining, the visual effects are wonderful. Before I see Bruce Almighty I remember I took generic viagra, then I saw Jennifer Ainston breasts bigger I got too excited.